Making a platformer was my first goal after joining #onegameamonth and coming up with ideas. “Another Platformer?” you ask. Well yeah, of course there are a lot of them around, but I wanted to learn more about the genre that influenced almost a decade of game releases. I also believe that the simplicity of the controls and the resulting ease of access makes the genre perfect for a short amount of fast and simple fun.

My aim was to make a rather polished game, so I wanted to make two simple games first in order to have the rest of the time until the deadline for my platformer project. I succeeded with this initial goal and created Undead Stones and Crash Racer in Java and haXe NME respectively. These games  turned out OK in my opinion. I had some negligible struggle with both of them mostly because I was getting used to the language/framework.
Despite the minor problems I expect having while getting used to a new language/framework and the first approach probably being subpar I wanted to learn something new for this platformer. I enjoyed working with haXe a lot so I decided to play around with a framework that seems to be very popular for flash games: FlashPunk. In my case more precisely: HaxePunk.

Initially I was reluctant to use HaxePunk. You know: I like doing things myself and want to be as little limited/dependent by the work of others as possible. I tried it nevertheless, implemented a simple platformer “prototype” and it was two things for me: Fun and Simple. I really appreciate the aspect that somebody else already did a lot of work for me and it was a delight to concentrate more on the actual game than the code around it. I decided to stick with HaxePunk for this game and it’s coming along nicely, I feel confident that this new game will be “my best/most fun game yet”, but It will be challenging as well, so brush up your jumping skills 😀

I’ve been working on CrashRacer the last couple of days. I added a few features and some content with every commit, and slowly the game advances to its final form. I’ve been taking development easy (hey, I still have february 😉 ), but these small steps brought me pretty far and close to completion. I aimed to make smaller games (UndeadStones and CrashRacer) the first few month to have more time for games I want to make, but are outside of my prior experience and comfort zone. But I’m gonna leave this to the future.

– rudimentary menu
– graphics for background and walls
– balancing (!)
– add wave information to HUD
– some kind of game over screen

Voila!
All in all I am very happy with this project. I learned how to use haXe (I’m certain there’s a lot of room for improvement) and was able to implement most of my ideas. The next question will be: “Is this game any fun?!, but I will leave the answer to the players.

I started working on (or playing around with) a new game today: CrashRacer.

The game idea came to me after some progress and it seemed like a good first haXe game project. I toyed around a bit and had somthing that resembled a moving car. I decided to use this an build the game on top of this “functionality”. The premise is simple: A car, that cannot slow down (for some reason) drives through a desert and has to avoid various obstacles. It will be a reaction kind of game. Development is not too advanced, but it will get there.

Development of the game started Wednesday, so about 4 days after I chose to join onegameamonth.
The idea that I used for my game was actually the first one I came up with. When I try to come up with ideas I think of small, realistic ones. I don’t want to start a behemoth of a project I know I cannot complete in the next few months (or more realistically: never). I want to see results and I want to be able to have fun with games as fast as possible.
So I look for small, dense, but complete gameideas, so it’s all about gameplay and an an arcade feeling (Maybe I will release older games later on, but they are very unpolished).

After Christmas I started fooling around with Slick2D, I “stole” a Link sprite and gave him animation/movement. I already had onegameamonth bookmarked, but I wasn’t too sure if I could handle it. I’m not (yet) too good with graphics and frankly do not want to use too much time for them. But stealing sprites from other games was also not possible, so my enthusiasm was not the greatest.

Suddenly, in the last days of 2012 I came across a post on reddit, which referenced a site called opengameart.org. I was psyched! There it was, a resource I could get graphics from and legally(!!!) use them in my games!? Awesome!

So I started development on Wednesday evening. I didn’t accomplish too much, it took way more time than I’d imagined to just get the sprites in the game. So I stopped until the next day. My motivation wasn’t the greatest on Thursday either and I had stuff to do anyway, so I didn’t really do anything.

The next day, Friday, I started coding and …I… was…. hooked! Programming was smooth, I started out slow, but I got “better and better”, just a few bugs, but I could get rid of them in less than 30 mins each. (A whole day concentrating 100% on working on a game, how awesome is that?) And by the time evening came, I wanted to stop, I realised that I managed to do more than I had hoped to, but I couldn’t just quit. So I continued, and suddenly it became very clear: I’m almost finished?! I was perplexed, because, although everything, every small feature seemed to take forever to implement I was almost done. It was similar to my programming learning experience, I just thought “maaaan, when will I be able to code” so often, I overlooked the fact that I could already code.
So in the evening I chose to use the tileset, featured for january #1GAM and I was surprised how easy it was to put it into the game!

The next day, I polished the game a little, implemented a score and health system, but nothing huge. I saw that the code got messier and messier the previous day, but I did (and still do) not care. Sure everyone can look at it and critisize, but hey: The game works! It’s my first complete Java/Slick2D game so I do not care what others may say about the code, but I sure know that I learned a lot for future games. And that is what I want to do: learn as much as possible. Atleast for this month, I succeeded in this epic quest.
All that’s left to say: Thank You @McFunkyPants for #onegameamonth! 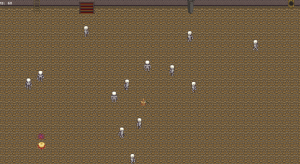